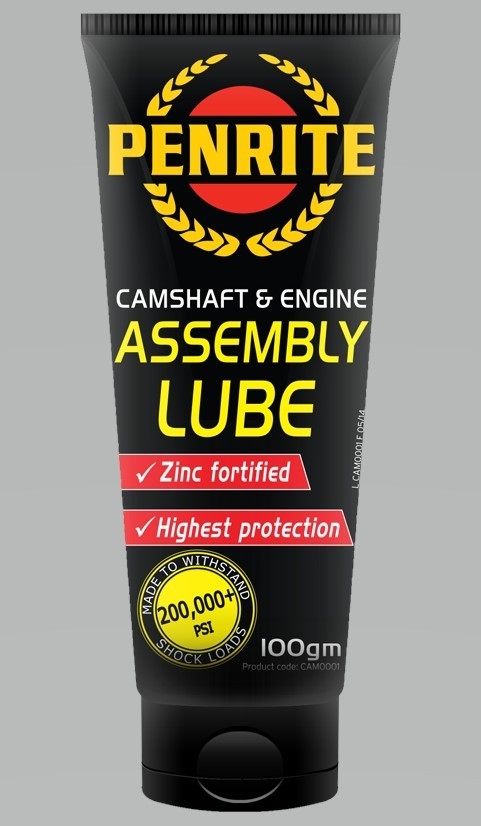 Penrite Cam Assembly Lube is a special purpose sticky paste formulated with a grease base.

Cam Assembly Lube is a special purpose sticky paste formulated with a grease base, designed for the initial lubrication of engine parts during the engine assembly process. It contains rust inhibitors, oxidation inhibitors, tackiness additives, zinc and graphite anti-wear agents to provide outstanding engine lubrication protection prior to and during first starting of new or rebuilt engines.

Cam Assembly Lube is recommended for initial lubrication of engine components during assembly. These items include camshaft lobes, followers, journals, camshaft and crankshaft bearings, pushrod tips, rockers, bushes, gears, thrust bearings and timing chains. Cam Assembly Lube is applied directly to moving or stationary surfaces that come in contact with other moving surfaces that would normally be lubricated with engine oil once oil pressure is established. Only a light film of product is required so it should be used sparingly. The product dissipates into the engine lubricant after first start. Cam Assembly Lube provides initial hydrodynamic lubrication and puts a lubricant barrier between moving parts. It can withstand loadings of over 200,000 psi so provides an excellent film of protection under extreme pressure and shock loadings from the motor. Cam Assembly Lube contains a tacky additive so it effectively sticks to surfaces whilst the engine is being built and therefore provides a far superior initial lubrication compared with standard engine oil that can run off the parts during the assembly. Cam Assembly Lube has also been used most satisfactorily in veteran engines with exposed valves and valve springs as a means of protection against rust and corrosion whilst the vehicle is not being used. Note- It should not be used on pistons as the graphite may hamper the bedding in process.